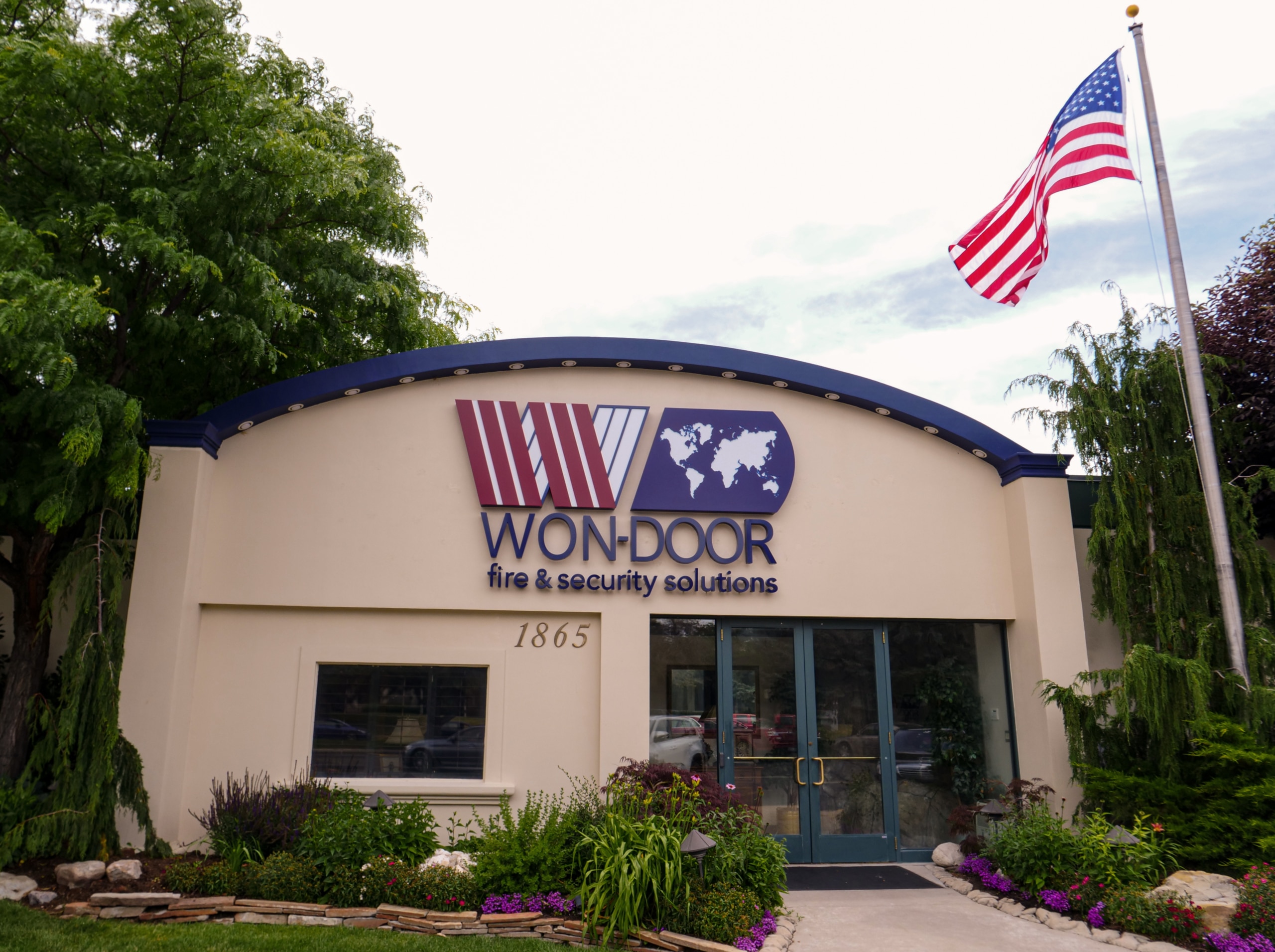 In 1962 Jay and Ruth Smart founded the Won-Door Corporation in Salt Lake City, Utah.  Prior to that time, Jay had spent most of his life selling building specialty products including window systems and folding partitions.  Relying upon his experience selling insulated storm windows Jay began work on a two-track folding partition.  The door was so revolutionary, that it led a customer to suggest to Jay that he should name his new company Won-Door, “because this door is truly WONDERFUL.”

The Development of Won-Door FireGuard

In the late 1960’s Jay began fire testing an acoustically rated folding partition.  He was obsessed with the idea of engineering a horizontal sliding fire door assembly that would permit large openings in fire resistive construction yet operate in such a way as to meet the special evacuation needs of persons with disabilities.  In 1977, his horizontal sliding fire door, now known as the Won-Door FireGuard, passed two fire tests at Underwriter’s Laboratory culminating more than a decade of fire testing and research.  In 1979, an installation at the California State Department of Rehabilitation in Sacramento gained widespread support from disabled advocacy groups for the use of the Won-Door FireGuard to create safe staging areas for the disabled in multistoried buildings.

In 1979, Jay was diagnosed with cancer.  Ron Smart, Jay’s son, took over the reins of the company.  Ron used his business acumen and truly made his father’s dreams a reality.  Ron assembled a great group of engineers and a strong management team which continued to improve the products. He invested much more in product testing so code officials would be completely confident in both the egress features of the door, as well as the incredible way that it stops fire, smoke and heat.

In 1988, the NFPA 101 Life Safety Code adopted provisions to permit horizontal sliding fire doors in selected applications in a means of egress. In 2000, significant code changes have greatly expanded the use of complying horizontal sliding door systems so that today, these systems are universally accepted as meeting both fire and building code regulations in virtually any application.

Won-Door’s U.S. distribution system also went through sweeping changes. Ron was among the first in the construction industry to invest in a network of company owned and operated branches across the United States. Sales skyrocketed.

Ron’s son Scott also joined the Won-Door Team after receiving his Master’s degree in Mechanical Engineering at Brigham Young University.  He is now the President of Won-Door Corporation and played a large part in the development of the new FireGuard CS (Compressed-Stack) fire doors.

Ron and Scott have a great love, not only for Won-Door products, but for Won-Door’s people.  Each manager that reports to them has been with the company for 30 years or more.  It should also be noted, that of Won-Door’s several hundred employees the average tenure is approximately 17 years.

Won-Door products are installed in a multitude of building types in North and South America, as well as Asia, Europe and the Middle East.  Architects the world over are discovering that horizontal sliding fire door systems are an innovative solution to the code constraints that might otherwise impede the creation of iconic and unique architecture.

This site uses cookies. By continuing to browse the site, you are agreeing to our use of cookies.

We may request cookies to be set on your device. We use cookies to let us know when you visit our websites, how you interact with us, to enrich your user experience, and to customize your relationship with our website.

Click on the different category headings to find out more. You can also change some of your preferences. Note that blocking some types of cookies may impact your experience on our websites and the services we are able to offer.

These cookies are strictly necessary to provide you with services available through our website and to use some of its features.

Because these cookies are strictly necessary to deliver the website, you cannot refuse them without impacting how our site functions. You can block or delete them by changing your browser settings and force blocking all cookies on this website.

These cookies collect information that is used either in aggregate form to help us understand how our website is being used or how effective our marketing campaigns are, or to help us customize our website and application for you in order to enhance your experience.

If you do not want that we track your visist to our site you can disable tracking in your browser here:

We also use different external services like Google Webfonts, Google Maps and external Video providers. Since these providers may collect personal data like your IP address we allow you to block them here. Please be aware that this might heavily reduce the functionality and appearance of our site. Changes will take effect once you reload the page.